At United Medical, we provide advanced diagnostic testing in our offices, so you won’t have to travel elsewhere for a test or procedure.

Having the capability to do bone density scans, blood work, and EKGs on-site allows our medical providers to interpret your results right away and begin treatment sooner.

Find out more about our on-site diagnostics and testing services, including:

A bone density test, also known as densitometry or DEXA scan, determines whether you have osteoporosis or are at risk of osteoporosis. Osteoporosis causes a decrease in bone mass, often referred to as thinning of bone. When this occurs, your bones become weaker and your risk of fracture increases.

A bone density test uses X-rays to measure how many grams of calcium and other bone minerals are packed into a segment of bone. It is a fairly accurate predictor of your risk of fracture. The test lasts about 10 minutes and exposes you to less radiation than a standard chest X-ray.

Who Should Have a Bone Density Test?

Bone density testing is recommended for:

Pulmonary function tests (PFTs) are a group of tests that measure how well the lungs take in and release air and how well they move gases such as oxygen from the atmosphere into the body's circulation. By measuring how much air you exhale and how quickly, the pulmonary test can evaluate a broad range of lung diseases.

Tidal volume measures the amount of air in the lungs without forcibly blowing out. Some lung diseases (such as emphysema and chronic bronchitis) can cause the lungs to contain too much air. Other lung diseases, such as fibrosis of the lungs and asbestosis, make the lungs scarred and smaller so that they contain too little air. Testing the diffusion capacity (also called the DLCO) allows your healthcare provider estimate how well your lungs can move oxygen from the air into the bloodstream.

Pulmonary tests are performed to:

With spirometry – one of the most common pulmonary tests – you will wear a nose clip while blowing air into a mouthpiece that is connected to an instrument called a spirometer. The spirometer records the amount and rate of air you breathe in and out over a period of time. Since the test involves some forced breathing and rapid breathing, you may have some temporary shortness of breath or lightheadedness.

During an ultrasound, a specially trained technician or doctor moves a device called a transducer over the part of the body being examined. Most ultrasound examinations are noninvasive; however, in some cases, the ultrasound transducer may be inserted into a natural opening in your body to get additional information.

Breast ultrasound (or sonography) is an imaging technique for diagnosing breast disease, such as breast cancer. If a mammogram shows a growth, an ultrasound can help determine whether it is a solid mass or a noncancerous growth such as a cyst, fibroadenoma, or lipoma.

For women with dense breast tissue, a breast ultrasound may also be used in conjunction with a mammogram. Doctors recommend a clinical breast exam about every 3 years for women in their 20s and 30s – and every year for women 40 and older.

A pelvic or gynecologic ultrasound is used to check the reproductive organs in men and women for problems, such as cysts and fibroid tumors. A pelvic ultrasound looks at the bladder, ovaries, uterus, cervix, and fallopian tubes of a woman – or the bladder, prostate gland, and seminal vesicles of a man.

Ultrasound is often used early on after a diagnosis of prostate cancer to determine if the prostate is enlarged or has an abnormal or asymmetrical shape. An ultrasound is also used during a prostate biopsy help guide the procedure.

Prostate disorders are common in men over 50. In cases of prostate cancer, ultrasound is often crucial because early detection, when the lesion is localized and curable, can lead to effective therapy.

A renal ultrasound is a safe and painless test to view images of the kidneys, ureters, and bladder. Renal ultrasound can identify hydronephrosis (which may indicate obstruction or blockage of the kidney), kidney stones, or kidney tumor cysts. Renal ultrasound provides important information regarding kidney function and is usually one of the first tests performed during an evaluation.

A thyroid ultrasound is an imaging method used to see the thyroid, a gland in the neck that regulates metabolism. A thyroid ultrasound is usually done when you have a growth on your thyroid gland. The exam can help tell the difference between a sac containing fluid (cyst) and abnormal tissue that may or may not be a cancerous tumor.

Do you have questions about your upcoming diagnostic test? Would you like to make an appointment for a test your United Medical provider recommended? Call the United Medical office nearest you in New Jersey, in Lyndhurst at (201) 460-0063, in Bayonne at (201) 339-6111, or in Clifton at (973) 546-6844. You can also request an appointment now. 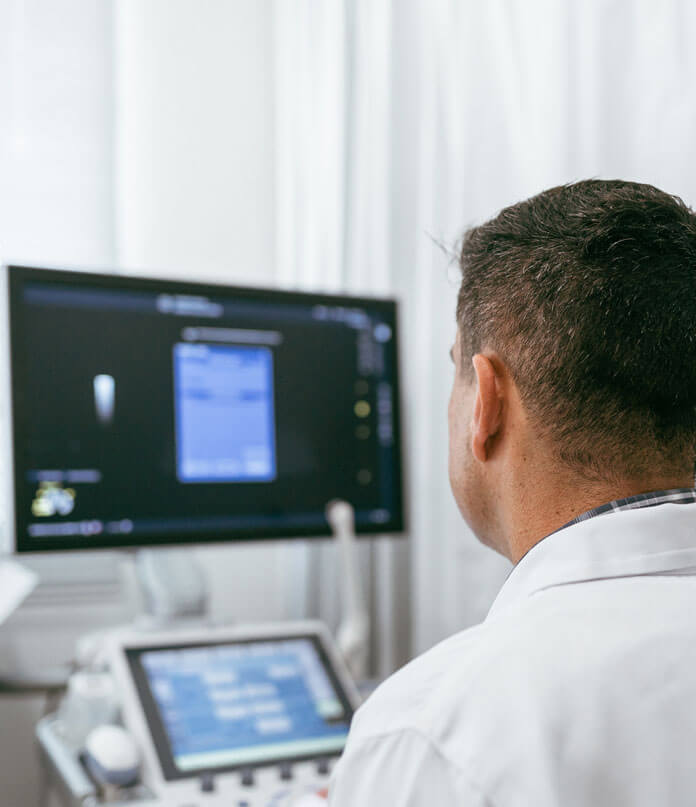